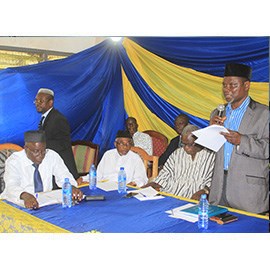 The Chairman of the Board of Governors of T. I. Ahmadiyya Senior High School (Real AMASS), Mr. Ayyub Morgan, has told the administrators and teachers of AMASS that students of the school can score A1 in all 8 subjects. He added that it is not sufficient to get 100% passes in the West African Secondary School Certificate Examination (WASSCE), and that the absence of 8A1s is a source of worry for him. He stressed the need to get qualitative passes from A1 to C6 without recording any D7, E8 or F9.

The Chairman of the Board which was inaugurated on 8th July 2015 made these remarks on Monday, 21st November 2016 at the Staff Common Room of AMASS when the Board met the teaching staff of the School to appraise the performance of the school. Having hinted at the best 2016 candidate’s name as Nuratu Ibrahim, he commended teachers of the following subjects: Social Studies, Integrated Science, Financial Accounting, Chemistry and Elective Mathematics.

Mr. Morgan further counselled the staff to maintain high discipline without infringing on the rights of students, and warned against caning and wasting instructional time. Subsequently, he encouraged the staff to work hard, pursue further studies, and plan for their retirement from the day of appointment; not to wait till the 59th year. Again, he called on the Parent-Teacher Association executives to devise innovative ways of motivating teachers to perform their duties as expected. All stakeholders were also called upon to play their roles well.

Prior to the address of the Board Chairman, the Headmaster of the School, Alhaj A. B. Abubakar had informed the gathering that the 2016 WASSCE candidates scored 100% passes. He added that the results were an improvement on the performance of the previous year. Again, he mentioned that the least pass in the results of the maiden candidates of Elective Information and Communication Technology (ICT) was B3. Consequently, he assured the Board of more qualitative passes in the coming years.

Mr. Ibrahim Kwaku Gyasi, an old student, a former Headmaster of the School and a Board member, commended the Headmaster for ensuring that teachers dress well to the extent that male teachers wear a tie on Monday. He added that he had seen the wearing of a tie on many occasions that he had been to the School on Monday. He again stressed the need for discipline in every aspect of the School.

A representative of the Regional Director of Education commented on teachers’ attitude and time on task. He said teachers should put up a positive attitude. He again said that teachers should start to teach immediately they get to class, without dissipating any time for other things. He also encouraged the organisation of in-service training to improve teachers’ approach to teaching and other issues.

Nana Adu Asare Mensah, the Amakomhene, who represented Otumfuor Osei Tutu II, informed the gathering that the Queenmother of the Asante Kingdom had passed on, and that her traditional one-week observation was slated for Thursday, 24th November 2016. He added that, as a Presiding Member of Kumasi Metropolitan Assembly (KMA), he and the other members were putting structures in place to keep the Assembly running. He encouraged all who were at the gathering that things should be done right.

Some teachers raised concerns about the need to document the names of teachers who contributed financially to the construction of the Teachers’ Block, the need to emphasise child responsibilities, the need to get a bigger library and the need to build more bungalows to accommodate teachers on campus. The Board Chairman said that the Board would attend to the concerns during their next meeting.

Adom Abena Ansah gave the vote of thanks after which the meeting came to an end.