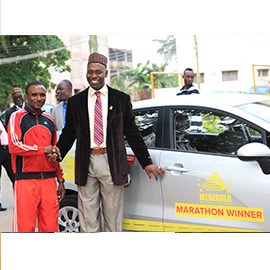 In a little while before now,

A blissful conjugal meeting birthed a son of unknown renown.

Unaware of his tomorrow,

He narrowed through the thick and thin of life like a shadow.

While in a state of full-fledged dismay,

T. I. Ahmadiyya Senior High School fished him out in gay

To begin to feed on giraffe-like athletic prey.

So he started unveiling his prowess in athletics,

While he pursued his academics

In an overwhelmingly supportive atmosphere

That perhaps exists nowhere in this sphere.

Though 2014 marked the end of his secondary education,

He was still in the circles of athletic competition.

And he responded affirmatively in 2016 and 2017 to satiate his quest.

His success in 2016 landed him a brand new car.

As if to prove the genuineness of his agility gathered in a jar,

He won the 2016 Milo Marathon to overcome that bar.

At this juncture, knowing this eminent long-distance athlete cannot be a taboo;

He is Malik Yakubu.