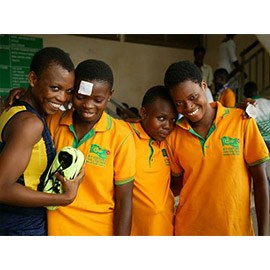 T. I. Ahmadiyya Senior High School ‘AMASS PHOBIAA’, as arguably the BEST SPORTS school in Ghana has yet again won SUZO in both the boys and girls divisions in just ended 2016 Inter-Schools and Colleges Athletics competition of the Ashanti Region at the Baba Yara Stadium on Friday February 26.

Not only did they win it but the huge gap between them and second placed schools will be a course for concern for other P.E. Tutors of rival schools.

Amass chalked 155 points in the boys division as against an improved JAPASS who came second with 86 points whiles Opoku Ware in 3rd position with 53 points, Osei Tutu placing 4th with 52 points respectively.

Amass phobia was just a delight to watch and was able to break some of the records according to Globalsportsgh.com reporter and now have an enviable achievement in Amature Atheletics in the country.

The competition ‘Inter-Co’ began about 14 days ago with the zonal qualification with the top six schools of the five zones qualifying to the grand finale dubbed the Super-Zonals.

These are the full results of the 2016 Super Zonals;